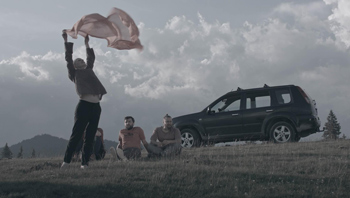 Being diagnosed with cancer, Ema’s life is fading away. As a last resort, her friends take her to a shaman, who uses some eccentric musical methods and invocations.
During the uncanny experience with shaman Gyuri, she realizes it’s already too late and the only thing left for her is to enjoy life.

Was born in 1987 in Botosani, Romania and in 2010 he graduated with a diploma in film at the Faculty of Theater and Television in Cluj Napoca, Romania. His thesis film won the "Black Pearl Award" Best Student Short 3rd prize at the Abu Dhabi Film Festival 2010, and the Award for Best Student Film at the Open Society Shorts 2011. Along with making fiction film he is passionate about theater and the integration of visuals into plays and stage design. The most import thing for him is how to add a new approach to an established genre; thus, he experiments as much as possible with everything that involves images and video.