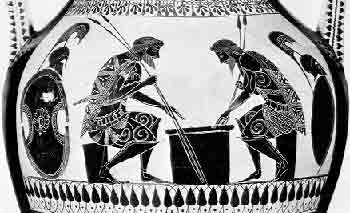 This is the most ancient board game on the whole planet and was related by the cosmic energies and dines.
As a ancient philosophic board game “Atherma Archegona” has been presented by the magazine Archeology and Arts (Labrakis Foundation) (περιοδικό Αρχαιολογία και Τέχνες), magazine IXOR (περιοδικό Ιχώρ) and from the official military magazine Army Aspects (περιοδικό Στρατιωτική Επιθεώρηση) and on internet by youTube, Google, Yahoo etc.

Does not exist nor a being on earth which in various moments of life (from infant up to elderly) that would not play with some game. Exist very simple games and complicated games which train the body, the sentiment, the brain or the intellect. Thισ documentarυ present analytically the structure of the ATHERMA ARCHEGONA and common Archegona elements that these contain in each population in entire the planet (kata topous PESSOI).

Gregory Zorzos, a native Hellene, was born in Kallithea, Athens in Greece (Hellas) at 1958.
Author and his research work have been distinguished by a lot of official organizations, and Ministries, in Greece and all over the world.
The author has wrote more than 250 books, board games and cdroms about ancient and modern history in the fields of economics, technical, board games, martial arts, software, love affairs, feasibilities studies, research, case studies etc.
Some of his books are now on all distinguished Universities as Cambridge, Harvard, New York College, Oxford etc and many National libraries such as Greece, China, Library of Congress, Diet Library etc.
Now he works on a large scale project in case to promote the common ancient games (petties/polis), mainly board games, between many nations throughout the Parliaments in many countries such as Greece, Cyprus, China, USA, UK, Denmark, Canada etc.
As a reporter, from his teens, the author has wrote many articles in many newspapers, magazines etc. and was editor in chief in some of them.
Was the President of the Historical Committee of many martial arts federations such as Pankration, Pammachon, Alindisis, Soma, Dielkistinda, Hoplomachia, Sciamachia, Pyx Lax, Rassein etc.