To rate the movie, you must login or register (for free).
The film was rated by 12 visitors with the rating 1,21 (For the rating of the movies we used the Bayesian algorithm, which is also used by the Internet Movie Database). 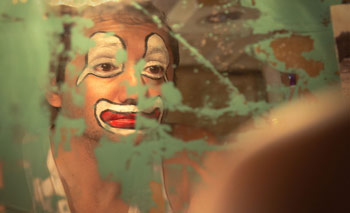 Jorge works as a clown in a small circus. Being a clown is all he knows and wants to be for the rest of his life. Suddenly, one day his boss informs him he will have to sell the circus due to the small audiences they have. This news will make Jorge fight in order to prevent the circus being sold, whatever happens, until the last show.

Roberto Flores began his successful career as an editor of advertising videos. However, as Flores progressed through his career, he jumped at opportunities he received to edit two feature films before he turned twenty five years old. Although he enjoyed editing those films, his work on them encouraged him to branch out further and direct his own independent film. Soon after he finished editing the two feature films, Flores directed his own production, a dramatic short film titled "Nocturno". "Nocturno" was met with overwhelming success; it was featured in more than twelve different film festivals around the world.
"The Last Show" is the second short film that Flores has directed. As stated earlier, although "The Last Show" will be screened at the 2016 Cannes Film Festival, it made its initial debut in 2015. The short film has since won the 2015 Peruvian Short Film Contest. This film contest is the most prestigious film contest in the entire country of Peru. In order to win the top prize, "The Last Show" competed against more than ninety other qualified participants and was judged to be of higher quality content and craftsmanship than all other competitors.