The bird fights its way out of the egg

To rate the movie, you must login or register (for free).
The film was rated by 5 visitors with the rating 0,71 (For the rating of the movies we used the Bayesian algorithm, which is also used by the Internet Movie Database). 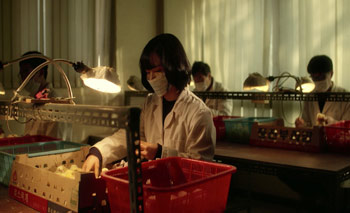 The bird fights its way out of the egg Detailed information

Mi-Yeon got an internship for three months at a hatchery. Her job was to distinguish the sex of newly hatched chicks. However, when she discovered where the male chicks were heading, she was shocked.

1. This is a story about employment and capitalism. Unemployment among young people is a global phenomenon. Getting a job often proves to be more difficult for women. This is because there is still an imbalance between the opportunities open to men and those which are open to women. And there still exists stereotypical preference of sex in hiring people.
2. I wanted to show the audience how irrational this gap between the employer and employee is by making a realistic and relatable film.
3. I quoted a passage “The bird fights its way out of the egg. The egg is the world. In order to be born, we must first destroy a world.” from