To rate the movie, you must login or register (for free).
The film was rated by 16 visitors with the rating 1,63 (For the rating of the movies we used the Bayesian algorithm, which is also used by the Internet Movie Database). 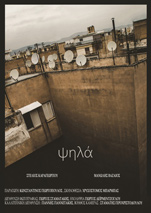 Stavros has a prestigious job but his life seems meaningless. So, he decides to quit. When he meets his older brother, he faces a critical question: can someone choose their own path or are they bound by their family's expectations?

The movie places the viewer in the middle of a crucial moment in a young man’s life. Stavros has taken the decision to leave his suffocating job -during a period in which this is considered almost a crime- in order to pursue a better everyday life. But this pursuit can’t begin, if he doesn’t get the informal consent of his family and by extension of society, through his older brother, Yiannis. Yiannis, being a family man and a struggling small business owner during the ever-growing financial crisis, believes that his brother is obliged to do what has been preordained for him, for the rest of his life, even if he can’t stand it.
Yiannis’ emphatic shut of the door for a better tomorrow for Stavros, has a devastating effect on the last one. Stavros stands before the harsh reality, which doesn’t allow him to escape the barriers that he had once chosen for himself and that tower around him through the societal perceptions. In the end, he decides to shake off his shackles, leaving behind the symbols of his oppression, a suit jacket and a briefcase. Yiannis, who stays behind, stands a changed man. He realizes that his brother was in absolute need of freedom, at any cost. In result, he feels deep remorse for the fact that he didn’t stand on his brother side at the time that he needed him more than ever.
The story explores how the burden of family’s and society’s expectations is capable to crash a person’s spirit. This leads inevitably in a society in which decay reigns everywhere. In a country like Greece, in a capital in deep dissolution, on a grey rooftop of an overcrowded neighborhood, in a now empty parental home of two estranged brothers.

Chrys Barmpas was born in Athens. He graduated from the National and Kapodistrian University of Athens, with a Bachelor of Communication and Media Studies. During his time there, he begun delving into cinema and looking for ways to express artistically through it.
So, he continued his studies, obtaining a diploma in “Cinema: History, Practices and Basic Directing Principals” and he is currently studying Digital Film Making in SAE Athens. The last few months, he has directed his first short film (High) and his first short documentary (Anava), while he has also created some commercial spots and web videos.