THAT WAS MY TWENTIES

To rate the movie, you must login or register (for free).
The film was rated by 31 visitors with the rating 2,46 (For the rating of the movies we used the Bayesian algorithm, which is also used by the Internet Movie Database). 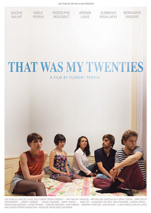 THAT WAS MY TWENTIES Detailed information

Camille, a twentysomething, goes back to her parents' after losing her job. She's reunited with her family and her cousins, who will try to cheer her up.

Florent Perrin was born in 1990 in Vénissieux. Far away from the big cities, he built is own cinephilia. At the age of eighteen he confirmed his desire to become a filmmaker when he discovered Abdellatif Kechiche and Arnaud Desplechin’s movies. After studying film production he became casting assistant and data manager for feature films. In 2015 after directing various student short films he wrote and directed « That was my twenties ».