To rate the movie, you must login or register (for free).
The film was rated by 1 visitor with the rating 0,10 (For the rating of the movies we used the Bayesian algorithm, which is also used by the Internet Movie Database). 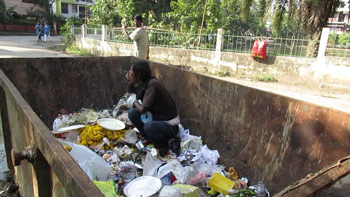 While humanity has progressed and made complex systems for its existence,while these systems have boosted trade and commerce, while humanity has made inroads into the outer space, humanity has also retrogressed. A section of the humanity still lives the lives of scavenging animals in urban jungles, surviving on discarded rotten things.To the conventional psychiatrist they are all numbers. This is the contradiction and paradox before the humanity today. There are no actors in this film, everything is cent percent real, there is actually no director also, providence itself is the director, there is only the cinematographer, script writer and the editor.

A general surgeon in active practice. Pursues many other varied interest, documentary film making one of them. Ethnically an Assamese of Indian citizenship, resides in Guwahati city, Assam. Born in 1966