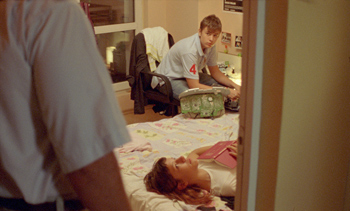 Paul Negoescu, scriptwriter and director, was born in 1984 in Bucharest. He studied film directing at the national film school. He directed several short films that were awarded and selected in many international film festivals, including Cannes (Semaine de la Critique - 2012), Berlinale (2008, 2009 and 2010), Karlovy Vary or Rotterdam. Two of his short films were nominated at the European Film Academy Awards in 2009 and 2011. His first feature film, A MONTH IN THAILAND premiered at the Venice Film Festival in 2012 and was awarded with the FIPRESCI prize in the Sofia IFF in 2013. His second feature, TWO LOTTERY TICKETS, premiered at Transilvania IFF in 2016. He is an assistant lecturer at his film school, founder of a film festival in Timisoara and a member of the European Film Academy. He started his own company to produce his own short films, but eventually he got to produce other films as well, including fiction films, documentaries or animation films.