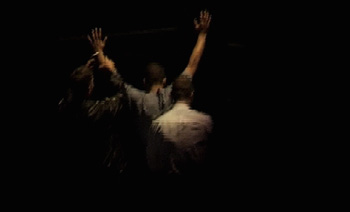 Unsuspected Time unfolds between scenes of daily life in the centre of Rotterdam and allegoric images of human anxiety, which borrow something of the atmosphere seen in detective stories and action movies.

Unsuspected Time is based on recordings of the daily scene of police patrols and captures the routine of ‘ensuring safety’. It is an
Experimental work playing with anxiety, obsession and drama.

Kiki Petratou (Greece, 1971) is an artist based in Rotterdam. She studied Fine Arts at the Athens School of Fine Art (Greece) and obtained her Masters in Art at the Piet Zwart Institute (Netherlands) and Plymouth University (UK). She has been recently admitted to the University of Amsterdam for the Master research Program in Media Studies. She has participated in several workshops in film and photography in Greece and the Netherlands.
Her work has been presented in a number of museums and galleries including the Nederlands Fotomuseum, TENT, RAM Foundation and Lokaal 01 in the Netherlands and film and video festivals such as the “Art Film and Video Festival” at the Prenelle Gallery (UK, 2005), “Pixel dance video weekend” at the Aristotelian University of Thessalonica (GR, 2005), “Video Art” at the Factory, (Athens, GR, 2005), “The one minutes” at the Centraal Museum (Utrecht, NL, 2002). She has been commissioned for the creation of 2 video-clips for the upcoming cd-DVD of the Dutch band ZIMIHC (May, 2006) and the short film on the concepts of Realism – Modernism – Postmodernism, made for the Department of Literature in the University of Leiden (NL, 2004).

give me a good reason to vote and comment on that....
masquerade